This site is about a previous instance of this event. For the current event, please see the updated site.

Nordic PGDay 2017 will be held at the Sheraton Hotel in downtown Stockholm. 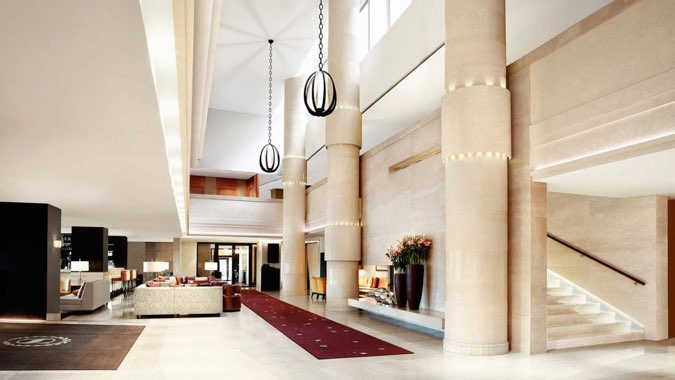 Visitors from out of town can of course stay at the hotel during the nights to minimize travel times.

The Nordic PGDay special rate has now expired, for reservations please contact the hotel directly for the best offer.

Getting to and from the airport

Arriving at Arlanda Airport there are quite a few options for getting to Stockholm City. Arlanda is situated about 40km north of the city so allow 30-60 minutes for travel depending on mode of transport and traffic conditions.

The Arlanda Express train is the fastest and easiest way to get to Stockholm City Central. The journey takes 20 minutes and the train departs from two stations at the airport: Terminal 5 and Terminal 2,3,4. Return fare is 540 SEK with single trips costing 280 SEK. Tickets are bought in vending machines either inside the terminal or on the platform, if you buy your ticket on board the train there is a steep extra fee. Free WiFi and power ports are available during the journey.

Arlanda Express takes you to the Central Station.

Like every airport in the world there will be fleet of taxis outside the terminal ready for your every transport needs, and like nearly every airport in the world there are a few things to remember on this very subject to avoid exorbitant fees. Sticking to the three major companies and asking for a fixed fare (should be around 500-550 SEK from Arlanda to the Sheraon Hotel) is the safe way we recommend. The taxi companies to use are (do note that there are taxis with very similar name and branding so check twice to make sure):

All cars within these companies accept credit cards (both chip&pin and swipe cards of major brands like MasterCard, Visa and American Express) and will always give you a machine printed receipt. Taxis in Sweden are legally required to display a price comparison sticker listing the highest fare per 10km. Any taxi with a higher price listed than 350 SEK can safely be ignored. If the sticker is missing then avoid the car altogether.

Uber operates the Uber X, Black, XL and Lux services legally in Sweden, but it typically takes longer to get a car than the regular taxi companies.

Arlanda is served by several coaches that run an almost direct service (just a few stops) to Stockholm City Bus Terminal (which is connected to the main train station), the journey takes around 35-45 minutes depending on traffic. Buses run on a very frequent schedule from right outside the terminals. Tickets can be prepurchased online or in vending machines inside the terminals. One of the coach services from Arlanda to the city is Flygbussarna, at 119 SEK one way (cheaper when purchased via their app). Free WiFi is generally available on-board.

The airport coaches take you to the Stockholm City Bus Terminal, which is across the street from the Central Station.

The Stockholm commuter trains are also serving the airport on the Uppsala-Älvsjö line. The journey stops at quite a few places and thus takes quite long, allow 45-60 minutes. If you plan to explore Stockholm on your visit it will most likely be economic to buy a multifare ticket which is valid on all commuter trains, metro and buses. A special addon ticket needs to be purchased for the airport station. Note: Tickets cannot be purchased on board any means of transport in Stockholm and a hefty fine can be the result of traveling without a valid ticket.

An app is available for android and iOS, where tickets can be paid for by credit card. Note that tickets will be activated immediately, and cannot be pre-purchased.

Once you have arrived at Stockholm Central Station, getting to the Nordic PGDay venue is a short short walk away. Exit through the main entrance on to Vasagatan, cross the street and continue down on Vasagatan going right. Sheraton Hotel will be a few blocks down on your left at the next major intersection. If you cross the water you will have missed it, turn around again.

Just like with taxis at the airport, stick to the three big companies and avoid every other car. The taxi rank outside Arlanda Express is controlled and often have staff that can assist.

Using the metro is both convenient and safe in Stockholm at all times during the day. The entrance to the metro is located, as can be expected, in the basement of the central station. Follow the signage with a white T on blue background (most of the signs also says Metro but not all).